As the most recent addition to the IAU’s Office of Astronomy for Development (OAD), I’ve a lot to live up to. Just read the previous posts on this blog to get some idea. No pressure!

But, let me introduce myself. I’m Vanessa McBride, Astronomer at the OAD since January 2017. For me the night sky has always evoked two distinct feelings: curiosity about what’s in our universe, and a sense of complete insignificance at being a tiny speck of organic matter on a tiny planet orbiting a bog-standard star in a rather run-of-the-mill galaxy. 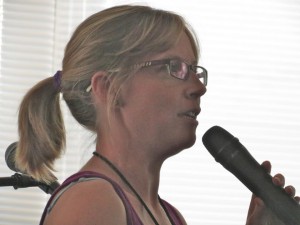 For most of my career I’ve tried to satisfy this curiosity by learning as much as I can about the universe. My PhD research at the University of Southampton focussed on massive X-ray binaries, particularly the population in our neighbouring galaxy, the Small Magellanic Cloud. These stars are fascinating, because they probe the conditions for formation of new stars, the highly contested evolution of massive stars, as well as physics under extreme gravity, temperature and magnetic field conditions. I also worked as part of large international team in the 4th INTEGRAL IBIS survey, where we identified and catalogued over 700 sources emitting in the hard X-ray part of the electromagnetic spectrum. In my most recent appointment, joint between the University of Cape Town and the South African Astronomical Observatory, I ran a small research group which focussed on various aspects of massive X-ray binaries. At its largest, this group comprised three postdoctoral fellows, one PhD student, two Masters students and an honours student and attracted grant funding to support the research activities. My graduate students worked on projects like investigating the demographics of these massive binaries when they are in much earlier stages of their lives, or how they transfer stellar material between the two components of the binary. I also taught two second year undergraduate astrophysics courses: one was a broad-based theoretical course, while the other was focussed on astronomical techniques and skills development and appealed to students from streams outside astrophysics. My participation in the astrophysics community including reviewing papers, serving on telescope time allocation committees, and managing South Africa’s involvement in the MeerLICHT telescope.

Working in this environment made me realise that I want to make contributions to education and societal development by using some of the skills I’ve learnt as an astronomer. The Office of Astronomy for Development, being both relatively new and small, but with considerable leverage through its association with the IAU, and wide coverage through 9 regional nodes, can drive implementation of new practice in the community. And it’s this possibility of being an agent for change and making an impact that excites me. I know many people in the astronomy community are devoted to effective education and the role it can play in development. I look forward to working with the academic, sci-comm and amateur communities to develop and document best practice for astronomy-based development work.

I’m part of a pretty unique interdisciplinary team here at the OAD, who are always up for a challenge. (See our team members and their backgrounds here.) So I’ve no doubt that by directing our passion for science, especially astronomy, into the most effective interventions, we stand a chance at changing the world. Who’s in?