Since 2011, the OAD has granted € 851,959 to more than 150 projects around the world through its annual call for proposals. Selected projects were charged with the task of using astronomy to promote sustainable development. This page reports the summary of the impact of OAD projects on global development.

The OAD has funded and coordinated a total of 158 projects in 5 continents. These projects have used astronomy, space/related topics to tackle challenges in their communities and regions in order to promote sustainable development and create a better society.

A map of the projects funded over the years is shown below:

OAD projects have targeted various audiences -students, general public, policy makers etc. -in more than 100 countries around the world. The map below shows the countries targeted by projects between 2013-20. 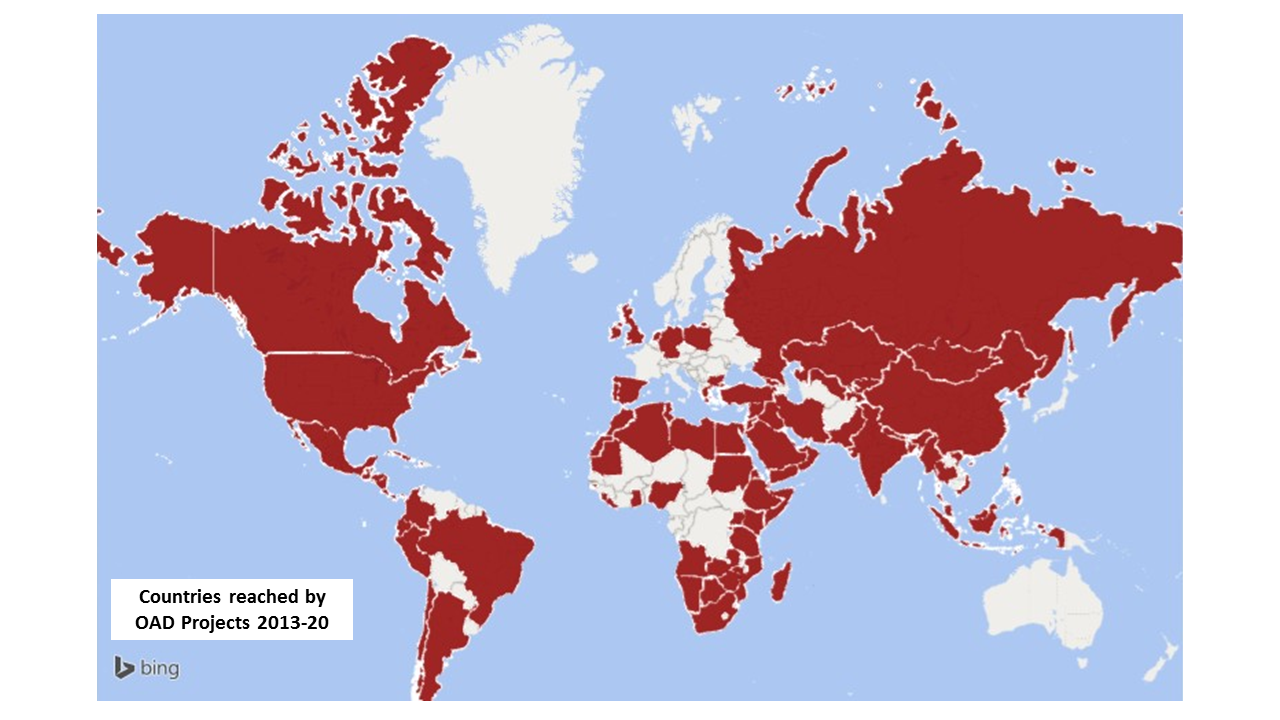 The IAU is the worldwide organisation of professional astronomers regardless of borders. The designations employed and the presentation of the material on our maps do not imply the expression of any opinion whatsoever on the part of the IAU or the IAU OAD concerning the legal status of any country, territory, city or area or of its authorities, or concerning the delimitation of its frontiers or boundaries.

A total of € 851,959 has been awarded between 2013 and 2020 through the call for proposals. The IAU OAD call is meant for small to medium projects with the average (and median of) grant amount hovering around €5000. These grants aim to encourage and kickstart innovative, new ideas to promote development, which fall outside the scope of traditional funding instruments. Projects are highly encouraged to look for matching or supporting funding from local institutions and other international bodies. External funding adds to the credibility and stability of the project apart from ensuring sustainability.

Sub-saharan Africa accounts for 31% of the funding granted through the OAD call for proposals. (The region also accounts for a similar proportion of proposals) Latin America + Caribbean has received the second highest total grant amount. These two regions constitute roughly 57% of the total grants disbursed by the IAU between 2013-20.

The trend in grant distribution corresponds to the geographic origin of proposals. From the available data, Sub-saharan Africa has submitted the most number of proposals, followed by Latin America+Caribbean and South & Central Asia. Australia+Oceania (Aus, Nz, Pacific islands) is the only region where no projects have been funded but proposals have been received.

The OAD uses the UN Sustainable Development Goals (SDGs) as the framework for development. OAD projects have influenced 11 out of the 17 SDGs. These are depicted below. 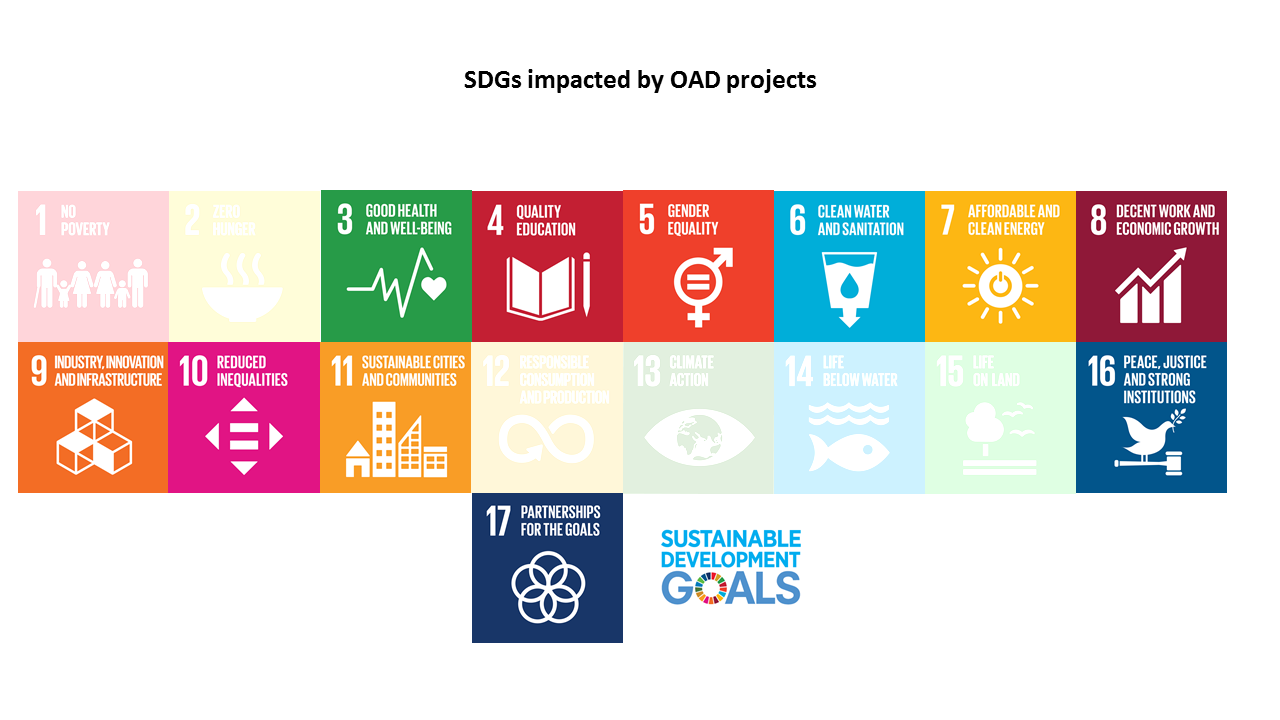 Every OAD project influences multiple SDGs but a majority of projects are linked to SDG 4: Quality Education. 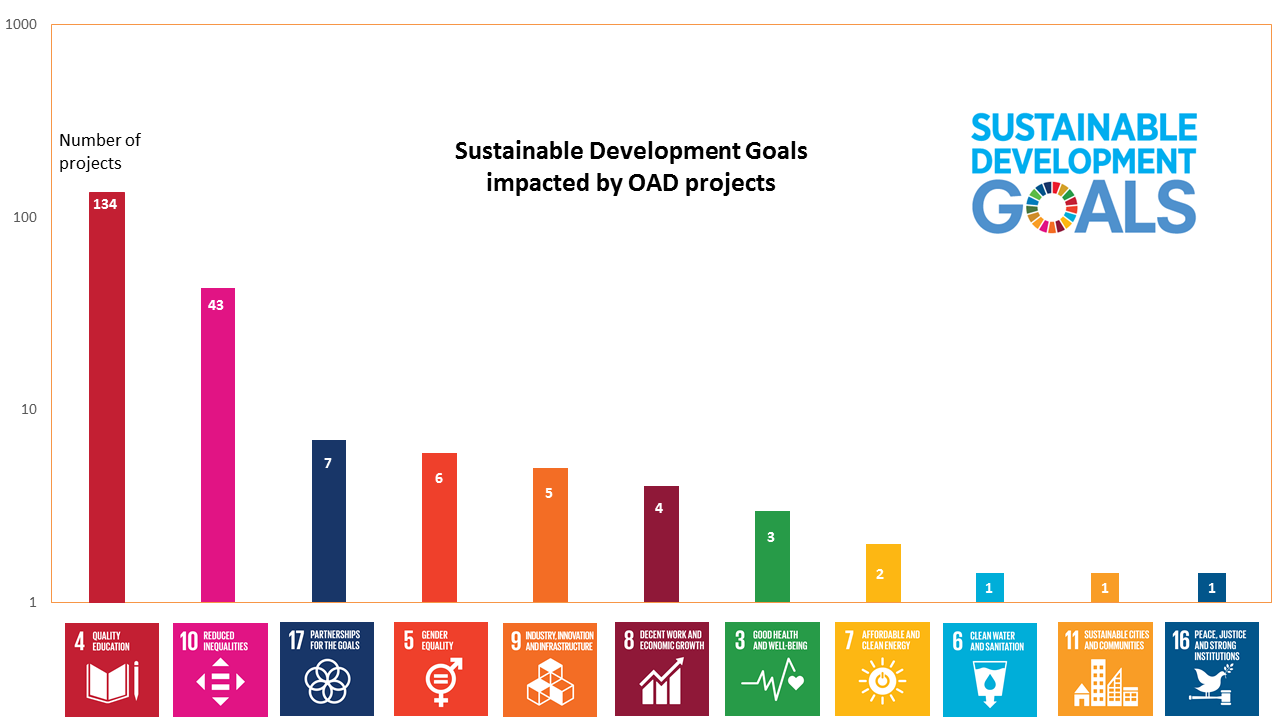 The OAD assessed all completed projects on their impact on development taking into account factors such as positive outcomes from the project, sustainability of activities, project reporting and resources developed, influence on SDGs etc. Projects were scored on a scale of 1 (lowest impact, red) to 5 (highest impact, green).

* two projects that were granted funding were unable to be implemented by the project teams. These ‘’cancelled’’ projects are marked (in red) with an impact score of 0. 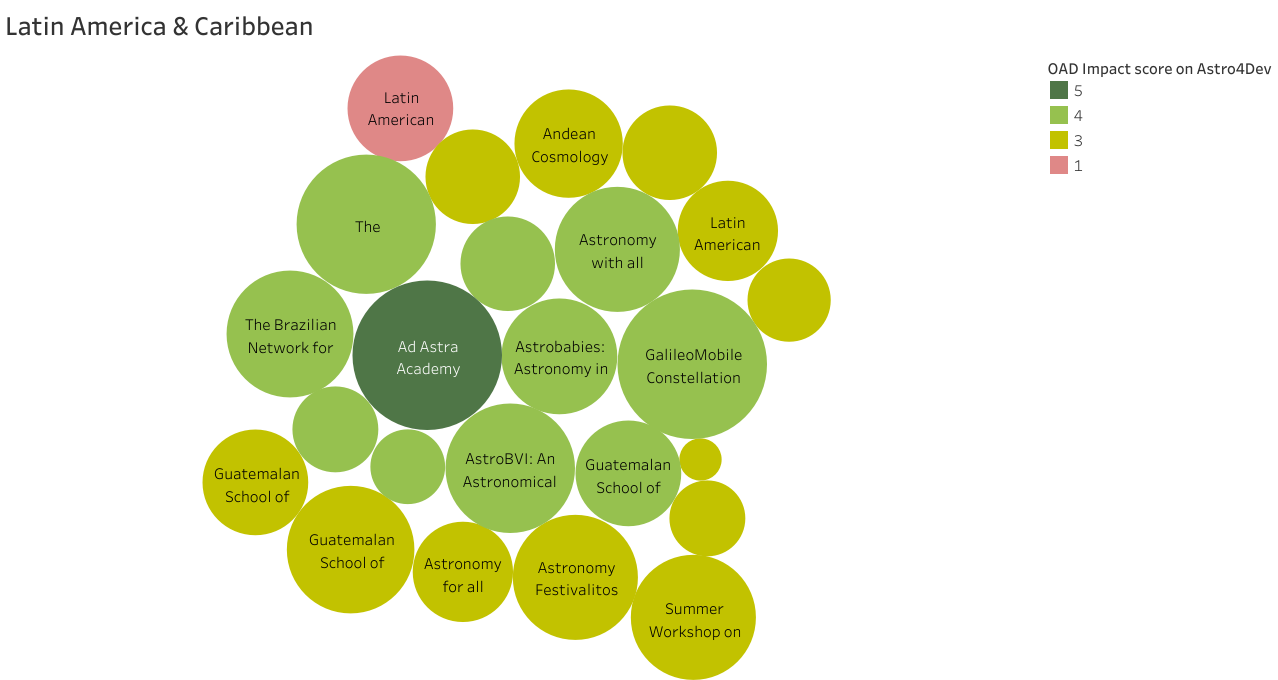 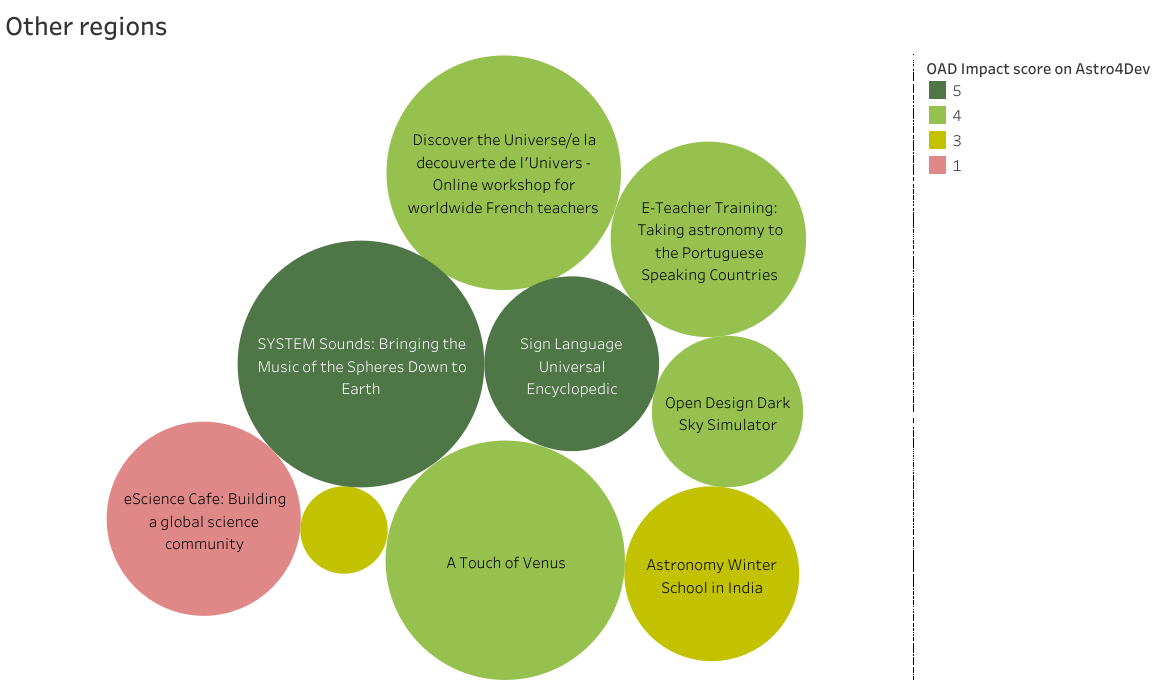 Success of implementation of OAD projects:

Completed projects were also rated on how well they executed their plan. A similar scale was used to score from 1(least successful) to 5 (most successful implementation). 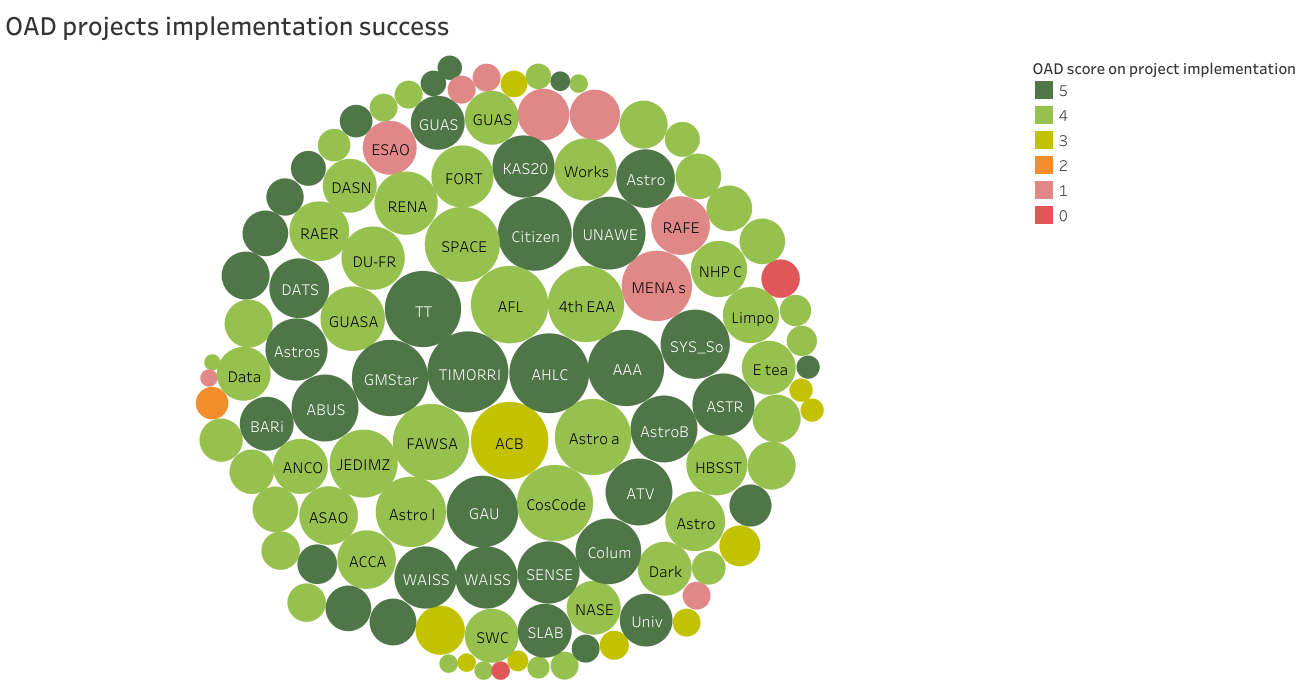 Another measure of the impact of a project is the resource(s) developed during the course of the project. Materials created by these projects, such as guidelines, educational materials for schools, university lecture presentations and videos, tactile resources, project reports etc., will be beneficial to others who want to run astronomy-for-development projects. These resources contribute to the legacy of a project and making them openly available ensures that they can be adapted to serve different conditions.

You can explore our portal for OAD project resources