The International Science Council has featured the Astrostays project in its Unlocking Science series, produced by BBC Storyworks Commercial Productions.

Unlocking Science is a new series presented by the International Science Council (ISC) and produced by BBC Storyworks commercial productions. The series explores what science is doing to address the challenges of global sustainability. It features a number of videos and audio-visual stories that “demonstrate how science works beyond the lab or the textbook, engaging communities and making a real-world difference”. Topics range from battling bias in AI, autonomous technology to climate change, the future of farming, and empowering marginalised communities.

One of the stories profiled is the Astrostays project (astro-tourism + homestays), a collaboration between the IAU Office of Astronomy for Development and the Global Himalayan Expedition (GHE). In an article titled “The communities using astronomy to bring tourism to their region“, the series describes the first Astrostays running successfully in India, benefitting local communities. Astrostays project founder, Sonal Asgotraa, and OAD operations manager, Ramasamy Venugopal, were interviewed for the article. Astrostays team member, Arun Radhakrishnan, contributed an audio clip narrating one of the indigenous sky folklores from the region.

The Astrostays project was first launched in the northern summer of 2019, attracting tourists to the village of Maan, not far from a popular tourist attraction in Ladakh, India. Members of the community were trained in basic astronomy and telescope operation and provided a telescope to offer star-gazing services to tourists. Astronomy drew tourists to Maan, who ended up staying at one of the newly established homestays in the village. The ‘astropreneurs’ earn revenue from star-gazing while the homestays open up another revenue stream. In addition, the community members gain expertise in finance, hospitality and other skills necessary to operate a tourism venture.

Due to the community-centred nature of the project, a portion of revenues is saved in a community bank account. This fund is invested in community projects, such as the recent installation of greenhouses and solar water heaters. 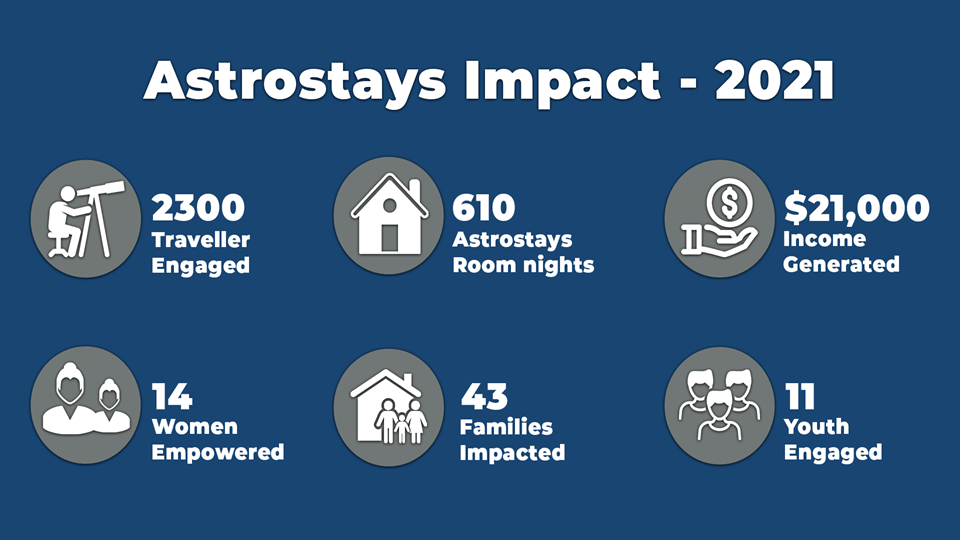 In mid-2021, Astrostays reopened to tourists and once again witnessed a hude demand. The team is also busy deploying new Astrostays, such as the recent one established at the Phyang Monastery in Ladakh. Future Astrostays are being planned in other parts of the world. Individuals and organizations interested in setting up Astrostays are requested to email info@astro4dev.org.

‘Unlocking Science’ is part of an ISC programme which seeks to improve how science is communicated to audiences internationally. The ISC is a non-governmental organization with a global membership of around 200 scientific unions and associations, as well as national and regional scientific organizations including academies and research councils. The International Astronomical Union is a member of the ISC.