March – November 2016
Astronomical tourism is the form of tourism that involves the sites with astronomical interest, historical and archaeological sites, modern research organizations (observatories, astronomical institutes), educational centres, space museums, planetariums, etc. It is part of scientific tourism. It may significantly contribute to tourism, as the interest towards science in the world is growing more and more. Astronomical tourism requires a tight collaboration between science and tourism, i. e. astronomical research institutions and individual astronomers on one hand (as well as amateurs and teachers), and travel agencies and experts in tourism on the other hand. Astronomical tourism may also significantly contribute to educational level by involving school pupils and students in cognitive tours to astronomical organizations. It also concerns the organization of scientific conferences and other events, as in this case a number of astronomers travel to the given country combining astronomy and tourism.
Armenia and neighbouring countries (forming the historical Armenian Highland) are very rich in sites related to ancient astronomy, as well as modern research institutions, and both may be regarded as centres for astronomical tourism. That is why we have initiated a programme of development of astronomical tourism in South West Asia and we are putting efforts on coordination of actions related to this subject. As an example, the Byurakan Astrophysical Observatory (BAO) is an important astronomical centre, also known for its unique architectural ensemble, rich botanical garden and visitor centre. BAO as scientific tourism centre webpage was created to show the efficiency of involvement of such organizations in the development of tourism.

The project “Development of Astro Tourism in South West Asia” has been run during 9 months, March-November 2016.

Study Visits to Astro Tourism Centres by Project Team members
In March-June 2016, a number of visits by the Project team to study the Regional Astro Tourism sites were organized. Here we describe the main visits:
 27.03-02.04.2016, Astro Tourism Group mission to Tbilisi and Abastumani, Georgia for seminars, discussion of collaborations and visiting astro tourism sites. The first part of the mission was spent in Tbilisi and the second part in Abastumani. A two-day workshop was organized at Ilia State University. Maya Todua, the Director of Abastumani Astrophysical Observatory (AbAO) gave a review of astronomy in Georgia, including its astro tourism sites. Areg Mickaelian, the Director of IAU SWA ROAD, represented IAU South West Asian ROAD activities, including our Astro Tourism project. Sona Farmanyan, Task Force 3 “Astronomy for the Public” Coordinator, gave a talk on the role of Archaeoastronomy and Astronomy in Culture in activities related to astronomy for development in South West Asia, especially emphasizing astronomical heritage sites. Another workshop was organized in Abastumani on March 31 – April 1. Visits to AbAO facilities (Meniscus telescope, AZT-14, big coronograph, the Observatory museum, etc.), cognitive tours, and other AstroTourism activities were organized.
 23-24.04.2016, Astro Tourism Group mission to Armenian Vayots Dzor and Syunik Provinces: 23.04 – Gladzor (medieval university with studies also related to astronomy) and Zorats Karer (ancient observatory), 24.04 – Tatev Monastery (having a column connected with calendar based on the position and orientation of Orion constellation mentioning the beginning of the year on 11 August). The mission aimed at investigating the above-mentioned sites, evaluating the degree of presentation properness of each site, identifying any issues concerning organization of scientific tourism in each site and finding solutions to them, collection of information for presentations from the point of view of scientific tourism for each site, recording materials for the film about Armenia as a Land of Science.
 12-23.05.2016, Astro Tourism Project Manager Areg Mickaelian’s mission to Central Asia: 12-17.05 – Uzbekistan (Tashkent, Samarkand, Bukhara), 17-20.05 – Kazakhstan (Almaty, Tian-Shan) and 20-23.05 – Tajikistan (Dushanbe, Sanglokh). A number of Astro Tourism sites were visited, such as Samarkand, Bukhara, Ulugh-Beg Ancient Observatory (Uzbekistan), Fesenkov Astrophysical Institute and Tian-Shan Observatory (Kazakhstan), Astrophysical Institute of the Academy of Science and Sanglokh Observatory (Tajikistan). Discussions were held on future collaboration within the IAU Strategic Plan.
 14-18.08.2016, Astro Tourism Group mission to Maragha, Iran: Areg Mickaelian and Sona Farmanyan visited Maragha, Iran for acquaintance to the medieval observatory and other related sites. Maragha Observatory was established in 1259 A.D. under the patronage of the Ilkhanid Hulagu and the directorship of Nasir al-Din al-Tusi, a Persian scientist and astronomer. Located in the heights west of Maragheh, it was once considered one of the most prestigious observatories in the world.
 05-08.10.2016, Astro Tourism Project Manager Areg Mickaelian’s mission to Tbilisi, Georgia: discussions with Georgian colleagues on possible exchange of tourists in frame of the project Astro Tourism in South West Asia.
 Study Visits to Zorats Karer (Karahunge) ancient observatory, Metzamor archaeological site (including the ancient observatory), Space Museum, Science and Technology Museum (including exposures related to astronomical investigations), Yerevan Physics Institute (Alikhanyan National Laboratory having Cosmology research group), Ancient rock-art (with astronomical content), etc.

Events related to the project
A number of events related to the project have been accomplished. It is noteworthy to mention about two conferences and science camp have been organized related to the Project:
Conference “Scientific Tourism in the South West Asian Region” 16.03.2016, Armenian Institute of Tourism (AIT), Yerevan
An active discussion was held at the end of the Conference, which aimed at identifying and evaluating the demand for scientific tourism of foreign and local visitors, discovering the scientific tourism potential and resources of Armenia, finding key issues and problems of organization and realization of scientific tourism in the above mentioned sites and finding solutions to them. Scientific principles and directions of organizing tourism were discussed and new ideas were suggested for promoting the region through scientific tourism. The conference brought together the most active representatives of tourism and science communities. It was a kind of starting point for tight collaboration between science and tourism, i.e. research institutions and individual scientists on one hand, and travel agencies and experts in tourism on the other hand. Areg Mickaelian, Head of Scientific Tourism Chair at AIT, talked on the role of scientific tourism in strengthening of regional and international rating of Armenia. A number of other presentations were given. Sona Farmanyan, the Coordinator of the Project, represented the whole project, its tasks and future activities.
Webpage: http://www.aras.am/Meetings/SciTourism/index.html

Young Scientists Conference “Cultural Astronomy in Armenian Highland”
20-23.06.2016, National Academy of Sciences of the Republic of Armenia (NAS RA), Yerevan
The meeting contributed on Astronomical heritage of Armenia, Ancient astronomy, Astronomy in the Middle Ages, Astronomy in ancient cultures, Ethnoastronomy, Astronomical bases of Philosophy, Religion and Astronomy, The problem of Extraterrestrial Intelligence, Astronomy and Astrology, Astronomy in Folklore and Poetry, Astronomy in Arts, Astronomy in Fashion, Astrolinguistics, Astroheraldry, Scientific Tourism, Scientific Journalism, Amateur Astronomy, Astronomical Education, Popular Astronomy, and other fields, most of which have tight relation to Astro Tourism, one of the most important contributors to Scientific Tourism, as Cultural Astronomy plays an important role in the development of scientific tourism. NAS RA President, Vice-President, and other academicians, heads of the creative unions (unions of Artists, Composers, Architects, and Publishers) and many other guests were present. Some 30 talks were given by astronomers, historians, archaeologists, linguists, representatives of arts, tourism, journalists, and others. The Proceedings of the meeting will be published by NAS RA Publishing House.
Webpage: http://www.aras.am/Meetings/AAC/

Third Byurakan Science Camp (3BSC) 22-27.08.2016, Byurakan Astrophysical Observatory (BAO), Byurakan
The Third Byurakan Science Camp was organized on 22-27 August 2016 at BAO and was aimed at promoting BAO and astronomy among the Armenian young people as a potential scientific tourism centre. During 6 days, 25 pupils accompanied by the organizers and Byurakan young astronomers stayed at BAO hotel and benefited the science atmosphere and contacts with scientists, as well as had active rest. Areg Mickaelian was the Director of the Science Camp and Sona Farmanyan was the Coordinator. Mostly young fellows of BAO were engaged in the execution of the project. All duties were distributed among the team, so that each person took care for a definite task. Target group was 12-15-year-old pupils. The Science Camp had rather rich program, including Scientific, Educational and Social ones. A number of lectures were given on various topics of Astronomy by BAO scientists, observations and tutorials were organized. Various meetings and discussions, intellectual and sports games, social tours were organized as well.

Publication of BAO photobooklet
As an example for other Astro Tourism sites, we have prepared and published Byurakan Astrophysical Observatory (BAO) photobooklet for touristic purposes. Such booklets are aimed at making the Astro Tourism sites or institutes widely known and attractive in order to encourage visits of many people, as well as serve as a source of information for tour packages for travel agencies and individual guides. The booklet contains the photos of Byurakan Astrophysical Observatory: main building, telescopes (2.6m telescope, 1m Schmidt telescope, 50cm and 40cm reflectors), guest house, Viktor Ambartsumian museum, laboratory building, conference hall, territory, and sky objects. This booklet may be used as a visiting card for the Observatory.

Although the webpage has a number of menus, still it remains easily navigable, attractive for both tourism experts and tourists, and catchy enough to retain visitors. The webpage has relevant design to its content.
Webpage address: http://iau-swa-road.aras.am/eng/AstroTourism/ 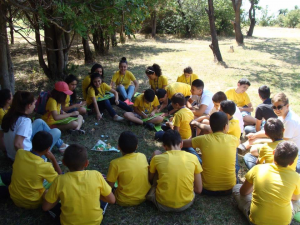